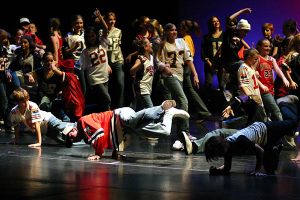 As cultural phenomena go, hip-hop is a giant. Music, fashion, art and language have all been sucked into its vortex, from Los Angeles to London, from the Bronx to Japan. MTV, Hollywood, the high street: hip-hop long ago broke out of the marginalised black communities where it was born. So it’s not surprising that the theatre, that bastion of white middle-class culture, should be feeling its beat.

I remember thinking that Alistair Spalding was mad when he programmed the first Breakin’ Convention at Sadler’s Wells in 2004, a weekend of performances, workshops and lecture demonstrations devoted to hip-hop dance theatre. Poppers, lockers, b-boys and b-girls: to be honest, I didn’t know what he was on about.

Now, two years later, and with a third Breakin’ Convention due in April, I have to admit that hip-hop theatre is here to stay. With its thrilling physicality, head-spinning virtuosity, rhythmic panache, dazzling mimetic skill and sheer sense of fun, it’s the most original dance form in years, and it’s determined to set the stage on fire.

During the next few months, hip-hop theatre will be showcased as never before in Britain. On February 2, at the Queen Elizabeth Hall, the German company Renegade opens an extensive UK tour of Rumble, its hip-hop Romeo and Juliet. On February 4, at the Peacock Theatre in London, Impact Dance and ZooNation join forces for a double bill of narrative hip-hop dance theatre.

Just ten days after Breakin’ Convention (April 29-30), Robert Hylton brings street dance to the South Bank when his London-based company, Urban Classicism, performs Verse & Verses, “a psychedelic take on the hip-hop genre”. But before all of that comes the world premiere of Tag . . . Me vs The City, an ambitious touring production choreographed by Jonzi D, the curator and host of Breakin’ Convention. It opens at the Nottingham Playhouse on January 31.

There are many reasons why hip-hop dance is breaking into the theatre, but for Jonzi D, a 36-year-old hip-hop artist from East London, the motivation was simple. “I started doing hip-hop theatre because I wanted to invite my friends.”

Jonzi may have been rapping and b-boying for years, but he also trained at the London Contemporary Dance School, an experience that engendered mixed emotions and led directly to his commitment to hip-hop theatre. “As a dancer I was embarrassed by what these middle-class white people were telling me theatre is,” he explains. “I wanted to represent my community in the theatre.”

That community has had more than its fair share of bad press over the years. It doesn’t help that rap music celebrates violence and misogyny, or that rap artists have been known to shoot each other. But Jonzi tells a different story. “It’s up to us as artists to present our truth. My experience of hip-hop isn’t this violent thing. Whenever I go to a hip-hop club there are no gunshots going off, there are people dancing.

“I think it’s about time we re-examined the culture of hip-hop. There is a perception of it being a rough thing because it comes from a rough environment. But if you look at early hip-hop, it was about struggle, it was about being something where you have nothing. It’s about finding heaven within hell.

“Hip-hop was the answer to the gang violence. Because of the environment it came from the battle was still there: ‘Instead of shooting you, I’m going to dance against you.’ Hip-hop was an artistic way of getting out the same frustration.”

Jonzi’s frustration was growing up in East London as the son of Grenadian parents. “I’m a true Cockney, born and bred, but I grew up around racial tension. We had to make sense of that. There were poor white people who blamed us for their situation. They said: ‘You lot have come over here and taken our houses and taken our jobs.’ I always felt like an outsider. For me hip-hop was a lifeline. It didn’t talk about roots and history, it talked about now. Hip-hop made sense of the complexities of our histories and our futures.”

Jonzi’s commitment to hip-hop theatre began in 1995, when he created Lyrikal Fearta, and continued four years later with Aeroplane Man, both of which toured worldwide. His troupe’s new status as an associate company of Sadler’s Wells has allowed Jonzi, who has choreographed hip-hop-inspired fashion shows, performed extensively as an MC/poet and appeared as a television presenter, to take his ambition up a notch.

“My personal struggle is how to make narrative out of hip-hop,” he explains. With Tag, a full-length production made in association with DJ Pogo (a master of turntablism) and the graffiti artist Prime, he hopes to do just that. Tag tells the story of a brilliant but obsessive graffiti artist who challenges authority with his spray can. It uses five men and one woman, all of whom are collaborating on the choreography.

“I love graffiti culture,” Jonzi says. “These are the unsung heroes of hip-hop culture because they are not performers. What they do has a sort of guerrilla tactic: they present their art in secret at night.

“I wanted to explore that within a theatrical context and discover the psychology behind it. Why risk your life late at night just to put your name up somewhere? The artist in Tag wants to challenge authority consistently; where does that come from? His childhood? We are exploring the struggle of a young kid who wants to say something and isn’t allowed to; he’s forced into his bedroom to scribble out his angst-ridden desires. His dad doesn’t want to know; he doesn’t connect with his child. At school it’s the same kind of thing, so then he wants to challenge the entire system.”

Jonzi also wants to challenge our preconceptions of how far hip-hop can go in a dance context, to show that what started as 90-second bursts of intense energy in the streets of the ghetto could expand into long sequences of theatrical movement.

“We wanted to spray the theatre with a can,” he says. “But we quickly realised that everybody would leave the theatre high because of the fumes. So we came up with the idea of physical calligraphy.

“The graffiti artist Prime has collaborated with a sculptor to create five three-dimensional letters made from metal, wood and upholstery. The dancers climb in, on and around these five structures. We use waving and popping techniques to have these dancers gradually drip from the set so that they represent paint themselves. Instead of using aerosol we are miming aerosol.”

With a tour that encompasses Nottingham Playhouse (which is co-producing Tag with Sadler’s Wells) and theatres in Malvern, Manchester, Ipswich, London and Leicester, it’s clear that Tag is targeting a mainstream theatregoing audience.

“Of course I would like the existing theatre audience to check out what I do,” Jonzi says. “But I would actually like to get a lot more people into the theatre. And if you saw Breakin’ Convention last year at Sadler’s Wells, that’s what we did.

“I’m not interested in changing what I do for the existing audience; I would rather take the exciting, vibrant and kinetic culture that is hip-hop and bring that to the theatre.”

Get on down — dancefloor moves for the supple

Also known as b-boying, breakdancing originated in New York in the 1970s with influences as diverse as ballroom dancing and Shaolin kung fu and became famous in the film Flashdance in 1983. Breakdancers spin on the axis of a part of their body as well as doing combinations of hops, flips and kicks, among others.

Impress your friends with snake-like contortions: bodypoppers move their joints in sequence along the arms, torso and legs so that a wave appears to travel across the body.

This funk dance was a product of Don Campbell’s inability to dance the funky chicken in the early 1970s; he became known for “locking” his arms with every move, inspiring people to urge him to “do the lock, Campbell”. He created some more moves and patterns, and hence Campbellocking, or locking, was born.

Got someone you’d really like to smack? Dance with them: uprocking is a dance fight in which the dancers move as though in a kung-fu battle but with more rhythm and continuous movement.

Rolling from shoulder to shoulder, the dancer waves his legs in the air continuously to form circles, much like a windmill might, if it had legs. LOUISE COHEN