HomeDancingTango is back and it’s hot to trot

Forget flowers and fedoras, the dance is back on the streets where it was born. Our writer goes to Buenos Aires for a crash course. 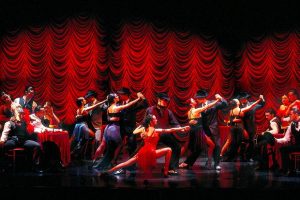 It’s 3am on a cool, still night in the trendy Palermo Viejo district of Buenos Aires. Hidden behind the ugly, fluorescent lights of a take-away, one of the area’s coolest club nights is in full swing. Svelte girls in harem pants press themselves tightly against brooding young men with ponytails and jeans, as they dance past tiny yellow fairy lights and old black and white films projected on to the walls. Beneath a giant, twinkling disco ball, crackly records of old and new boom through the speakers: soft violins and accordions, then a burst of James Brown, then a strange, soft ambient instrumental.

This is tango in 2010, and there’s not a fedora or fishnet stocking in sight. After decades out in the cold, the national dance of Argentina is fashionable once more: from the traditional spit-and-sawdust milongas (tango clubs), where elderly husbands and wives shuffle the familiar steps of their youth in a circle of wooden chairs, to new underground nights such as tonight’s Tango Lab in Palermo.

“When I was a kid tango was something your grandparents did,” says Pedro ‘Indio’ Benavente, who runs Tango Lab. “But now we’re dancing it too, in new ways, in the undergrounds. We have to keep tango moving to keep tango alive.”

The new-found demand for the dance has prompted a flurry of new fusion genres such as electro tango and tango dub, as well as several tango shows. Now, what has been pipped as the world’s first tango musical, Tanguera, is coming to London after sell-out shows in New York, Berlin and Madrid. Its arrival could not be more timely. The popularity of the dance has also spread to the UK, as a revival of dance classes sweeps the nation, due in no small part to TV shows such as Strictly Come Dancing. Milongas and tango lessons are popping up in pubs and restaurants all over the country, while tango blogs (try mshedgehog.blogspot.com and tangothoughts.typepad.co.uk) offer musings on everything from dancefloor manners to Diego Maradona.

As any Buenos Aires local will proudly tell you, tango was born in the brothels and slums of the city. It was first danced by the immigrants who arrived here from Italy and Spain in the late 18th century. They came hoping for a better life with a crop of the country’s fertile land, but most ended up living in the squalor of the harbour, La Boca, making a living from crime and prostitution. The pained lyrics and melancholic melodies of tango songs were borne out of the immigrants’ longing for their homelands and lost loves. In the courtyards of their crowded tenements, prostitutes, punters and policemen made up the two, four steps of the dance. Surprisingly in this most macho of nations, men practised with each other (they would never dance such disgraceful moves with their wives).

In its formative years, tango was forbidden. It is even said that its distinctive slow, subtle, close to the floor steps were created by couples so that they could dance without being spotted by the authorities. It was only when the movement reached Europe, and the dance halls of Paris, that it became acceptable for the upper classes of Argentina to take it up, paving the way for tango’s golden era, with stars such as Carlos Gardel exporting its sensual moves to audiences across the globe.

In the Fifties, however, tango started to lose its cool. As rock’n’roll, then electronic music reigned, the national dance was banished as old-fashioned. Now, almost 100 years after Gardel sang Mi Noche Triste, tango is “in” again.

Tango is popular again in part because tourists here in Argentina cannot get enough of it. The colours of the rainbow houses of La Boca now feel like a theme park, with dancers in red and black posing with roses between their teeth for photos, and the city is also scattered with dance and dinner combination shows for visitors. Argentinians laugh dismissively at these inauthentic spectaculars, known locally as tango for export, but they must also thank tourism for its role in reviving demand for the dance.

Tourism in Argentina has thrived ever since the economic collapse of the late 1990s and early 2000s. The fall of the peso was devastating for the nation’s people and their life savings, but great news for savvy travellers who arrived in throngs to sample world-class steaks and fine wines at very low prices. Argentina, and tango, was in the spotlight.

Coincidentally, Tanguera opened in 2001 at the height of the crisis as the city’s banks shook under the wrath of riots. Diego Romay, the show’s creator, waited in anticipation to see if people would spend their precious pesos on tickets to his tango show.

“We didn’t know what would happen,” he says. “But in the end people came. We were playing to full capacity, while outside people fought in the streets.

“I think the show offered a window of hope. The audience saw something that reminded them of their country’s history and culture. Perhaps, in a crisis people want to return to their roots.”

For the young stars of Tanguera, tango’s return to fashion has a more simple explanation — the lure of the embrace.

“The fever for tango started in the 1990s,” says Junior Cervila, a slick and muscular dancer who plays the villain of the show, Gaudencio. “The key was the need for el abrazo, the embrace. People had danced singly for two decades to disco, and they felt a need for contact with people again. It’s a good hook up.”

Gustavo Fortino, another Tanguera star, agrees. Sipping red wine between dances at El Porteño Bailarín, a traditional tango club close to the city centre, he says: “Milongas are very open. Whether you’re a fat woman, an old man, a foreigner, it doesn’t matter. It’s an opportunity to meet a new person.

“Of course, people still love pop and rock and electronic. I’d say only about 10 per cent of young people can dance the tango. But it’s growing.”

Once again, Argentinians have taken up tango to get up close with those around them.

Taking all this into account, it’s with some trepidation that I agree to a tango lesson with the Tanguera dancers in a studio across town. As a child of the eighties, I’ve danced alone all my life and the closest I’ve come to dancing tango was probably a lethargic two-step to Grace Jones’s reggae cover of Libertango at a house party.

From the start, it’s clear that tango is easier if you’re a woman. The man leads, and as long as she can master walking backwards, the main aim for the female is to allow her partner to guide her across the floor.

My tango teacher, Leandro, patiently talks me through the basic steps, and shows that the dance is almost like a walk to music. I learn to softly slide my feet in time with his as we move and twist and turn my hips on the spot to make a figure of eight.

I’ve never really listened to men, but as the lesson goes on I start to get the hang of it, and in truth there’s something enjoyable about letting a partner take control and lead you. The dancers encourage me not to worry too much about the steps — true tango, after all, always had an improvised style and is about feeling and passion rather than formula. You need four legs but just one heart, goes the old Argentine saying. “Relax and enjoy it,” Leandro says. “The small things don’t matter.”

Tango is undeniably sexy, and the abrazo takes some getting used to. On a couple of occasions I’m so struck by the sight of a dark, handsome Argentine dancer’s face an inch away from mine that when the music starts I find I can’t remember a single step.

The Tanguera show itself combines moments of traditional, close to the floor tango with contemporary routines, lifts and high legs to tell the story of two young lovers in BA’s seedy underworld. With a company of more than 50, and full orchestra, it could never maintain the intimacy and passion of a milonga. However, its creators hope that Tanguera will break down some stereotypes and show the world there is more to tango than Rudolph Valentino stomping around under a streetlamp.

Even the country’s most cherished purist tango dancers don’t seem to mind Tanguera’s fusion of old and new. One of the show’s starring roles is played by the glamorous 75-year-old Maria Nieves, a tango legend in Argentina who has danced all over the world.

“Tanguera gathers the old style and the new steps the young people do, and to me that’s amazing,” she says in a husky whisper. “When I began dancing in the milongas in the Fifties, no one wanted to look like anyone else. We all wanted to have our own style. Tango is not one, two, three — it’s a feeling. It has to be from the heart.”

Back in El Porteño Bailarín, the record finishes and Gustavo escorts his partner back to her seat gracefully, smiling contentedly. “We can change the rhythm or the music, but it doesn’t matter. Here, there will always be milongas. There will always be tango.”