HomeStay FitWhy you should work out in cold weather

Scientists have found that exercising in winter is very effective, so get your kit on and head outside. 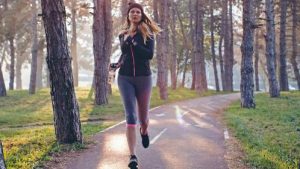 If the arrival of a cold snap has you slinging your trainers under the bed to gather dust until spring — think again. What you should do is head outside where the cold temperatures will help you to get the best workout you’ve had all year. Whether you are running, doing an outside military-style boot camp or cycling, sports scientists have found that the body responds positively to working out in cold weather, which lowers your heart rate and body temperature. With less stress on your heart, exercising feels easier, enabling you to work out harder, for longer.

In a trial conducted at St Mary’s University, Twickenham, Professor John Brewer — who is head of the school of sport, health and applied science — found that even the relatively small difference in temperature between exercising outside during the winter and summer in the UK can significantly enhance performance. “Scientists have tended to think that the seasonal changes in temperature we experience in the UK aren’t extreme enough to create physiological changes,” Brewer says. “Our findings have proven that there absolutely are positive adaptations that come with exercising in a typical winter temperature compared to a typical summer temperature.”

For the study Brewer and his team recruited six male volunteers, all of whom were regular gym-goers. First they tested their fitness levels, then asked them to perform two separate running trials in special environmentally controlled chambers at St Mary’s. On each occasion, the men ran for 40 minutes at the same intensity, but with the heat labs warmed to 22.3C to replicate British summer time or cooled to 8C to simulate a typical winter day in Britain. “On both occasions, we took physiological measures such as their heart rate and blood lactate levels, as well as testing their sweat rate or how effectively they stayed hydrated,” Brewer says. “But we also looked at their perceived measures of thermal sensation — that’s how difficult or easy they found the activity in the different conditions.”

The results will be no surprise to those who already prefer an invigorating chilly morning run to a hot slog through the park on a summer’s day. “We found the subjects’ heart rates to be an average 6 per cent higher at 22.3C — an average July day — something that can impair performance,” Brewer says. “There were also big differences in sweat rate, with the ‘summer’ runners losing 1.3 litres of fluid after 40 minutes, 38 per cent more than they did in the cooler climate.”

One of the issues affecting summer workouts is the effort it takes for the body to maintain its core temperature. Trying to keep cool places extra stress on the heart and cardiovascular system, and increases the rate at which your body needs to sweat. “The upshot of the study is that most people are able to work harder for longer when exercising in the winter than they would in summer,” Brewer says. “And that exercise will almost certainly feel a lot easier to complete when it’s cold.”

Although the trial focused on running, Brewer says that the results have implications for other outdoor exercise, including power-walking, cycling and high-intensity interval training. There are plans to publish the findings in a scientific journal and also to use them as a platform for additional research. “We looked at the basic principles of exercise, so that the results would hold true across a range of activities,” he says. “What I would say is that the benefits depend on a relatively high intensity of effort, so we are talking a brisk walk over a stroll and a hilly bike ride over a gentle cycle. You would still get gains from exercising outdoors at a more gentle intensity, but the improvements would be less marked.”

However, he adds a word of caution: plummeting temperatures do not make every type of exercise more beneficial. “Open-water swimming is not recommended when it gets too cold as there can be risks to health,” Brewer says. “Even in the relative warmth of the summer months, British waters can be cold, but in the winter they can be treacherously so, and you need to take extreme care when swimming outside.”

Professor Mike Tipton, a researcher in the extreme environments laboratory at the University of Portsmouth, proved this in research published in The Journal of Physiology a few years ago. Even on a warm day, plunging into cold water without taking time to acclimatise can cause heart attacks in the fittest and healthiest people, Tipton found. The body’s cold-shock response, which speeds up heart rate and causes people to hyperventilate, can conflict with what scientists call “the diving response”, which does the opposite, causing the heart to develop abnormal rhythms. “It can result in drowning and heart problems within seconds,” Tipton says.

Swimmers aside, a study conducted by the American College of Sports Medicine also concluded that, “for the most part, cold weather is not a barrier to performing physical activity”, although you need to be adequately prepared. A good warm-up — indoors or out — is important to ensure that muscles are ready for vigorous movement and, of course, you need to be dressed for it.

“One of the biggest mistakes that people make is wearing too much or too little clothing on winter workouts,” Brewer says. “Opt for lots of thin layers, made from moisture-repelling fabrics that can be peeled off if you start to overheat. Keep extremities — your hands, feet and head — warm. And add a waterproof layer if it’s wet — damp clothes can freeze when it’s very cold.” Comfort, he says, is key. “A lot of it comes down to psychology,” Brewer says. “If you know that you are not going to suffer, you are much more likely to look forward to stepping out of your front door.”

The cool kit to keep you warm