Adverts linking animal cruelty with dairy and meat products have been placed on billboards and bus shelters across the country as part of a “go vegan” campaign. 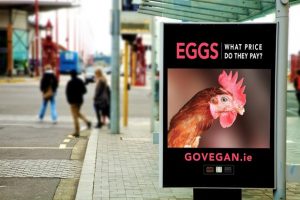 Campaigners said they hoped that shoppers would recognise a link between animal harm and their lifestyle choices.

“Most people, like I was a few years ago, are buying wool, leather, make-up that was tested on animals, and products like meat, eggs, fish and dairy with no idea of how those products got into the shops,” Sandra Higgins, director of the Eden Farmed Animal Sanctuary, said.

“I want this campaign to get people asking questions about what happens to the animals for them to have those products. I really believe that once people know, they will no longer partake [in them].”

Ms Higgins, a psychologist from Meath, wants to encourage veganism through the campaign, which is being funded by an anonymous donor. She became vegan in 2009, less than a year after setting up the animal sanctuary.

“I wasn’t vegan when I started the sanctuary. I learnt from the animals that they’re sentient and that they feel the same as we feel. Of course they’re different to us, but they share so many characteristics that we have,” she said.

“I visited a goat dairy and I learnt that the babies are separated from their mothers so that humans can have milk. I’d been a big consumer of dairy and I thought that I needed [it]. I started to research the issue and I went vegan overnight.”

Ms Higgins has sent 250 information packs to people who have contacted her since the scheme was launched. These give advice on meeting nutritional needs on a vegan diet and on buying vegan items such as clothing, make-up and cleaning products.

Sinead Loughnane, a nutritional therapist in Midleton, Co Cork, welcomed the campaign but said that the vegan diet was not suitable for everyone.

“The campaign is good in the sense that it has the vegan guide and provides information on good protein and carb sources. They also provide some recipes, which is great,” she said.

“Talking nutritionally, the vegan diet can and does have a lot of benefits to people, such as anyone with high cholesterol or cardiovascular diseases. Animal product foods might be inflammatory in the body, so by replacing them with beans and lentils and vegetables, it’s a lot better.

“I wouldn’t say a vegan diet is suited to everyone. I have many clients who might be vegans but they’re not thriving on the vegan diet. It might be that they’re not aware of what foods to have, and they rely on bread and chips and so on. If they reviewed all the foods, they could live a very healthy life by combining the best sources of