HomeProduct ReviewsTo keep off all the trimmings, hit the gym . . . hard

A large roast potato contains 193 calories. One parsimonious serving of brandy butter has 191. A portion of red cabbage braised with cooking apple holds 166. 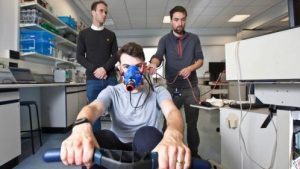 The metabolic casualty list for most people’s Christmas Days is long and gruelling. The average energy intake has been estimated to be 7,000 calories — three and a half times the daily 2,000 calories recommended for women.

The Times brings you tidings of discomfort and joylessness in the fourth and last of this year’s series of Christmas experiments which proves that it takes an awful lot of physical activity to rid yourself of this much food.

The first step was to try to shake all the accumulated buck’s fizz and trifle off with the help of a Fitbit, a watchlike device that calculates calorie expenditure by analysing one’s movements.

There are 2.6 miles between my flat in east London and the Times office at London Bridge. Surely walking this distance and back each day — and all the steps in between — would quickly banish the flabby ghost of Christmas past?

Apparently not. Over 11 working days the Fitbit logged an average of 16,480 steps a day. This worked out at a daily budget of 2,742 calories, excluding weekends. At this rate, without dieting, it would take nearly six weeks to work off the effects of a day’s overindulgence.

For a more precise estimate we visited Brunel University London’s Centre for Human Performance, Exercise and Rehabilitation. Oliver Gibson, a lecturer in physiology, explained that the human body was highly adept at storing energy but not so good at spending it. It takes nine calories worth of activity to lose a single gram of fat.

Using a mask called a respirometer, scientists can measure the volume of oxygen and carbon dioxide you breathe out as your cells break up molecules of glucose and fatty acids.

The second part of the experiment involved walking and running on a treadmill, pedalling on an exercise bike and rowing on an ergometer while hooked up to the mask in order to measure the rate at which each of these activities used up energy.

Dr Gibson produced an assemblage of joint-stiffeners and wrist and ankle weights known as an ageing suit. This device has an abruptly leadening effect on the limbs (and soul), giving a moderately fit 27-year-old reporter the body of a world-weary 50-year-old news editor. Walking at a steady 3.7mph without the suit ate up 6.8 calories a minute, meaning that it would take 63 miles or 17 hours to burn off a 7,000-calorie Christmas.

Clad in the arms and legs of an overweight middle-aged man, however, I worked through the same amount of calories at just 2.5mph. This means that it would take a mere 45 miles of walking to shake off 7,000 calories.

Dr Gibson said that it did not matter which activity people chose so long as they could keep it up without losing motivation.

It may come as some consolation to know that by pottering around the house and watching the Queen’s speech you will have used 2,000 calories already. Good luck: there are only another 5,000 or so to go.