HomeBodybuildingStudent bodybuilders bulked up by selling proteins to gym fans

How We Made It: Elliot Dawes and Adam Rossiter, founders of Bulk Powders. 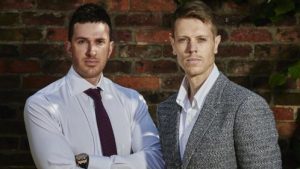 Adam Rossiter, left, and Elliot Dawes are preparing to take on the big names in America

Elliot Dawes and Adam Rossiter were not typical university students. While most of their peers burnt the midnight oil, their passion was to burn calories.

“We both got into the gym at about the same time,” said Dawes, who read law at Essex while Rossiter studied computer science. When they were not completing coursework and attending lectures, the pair bonded over exercise and protein bars.

The friends were inspired to start a business after noticing that protein supplements for bodybuilders were significantly cheaper on American websites. In 2004, they borrowed £6,000 from their parents to set up a website that sold imported products.

Two years later, they started their own range of nutritional supplements, Bulk Powders. “The products we were bringing in were in high demand, but not available in the UK and Europe. It was a natural step for us,” said Dawes, 34.

The switch paid off. Last year, Essex-based Bulk Powders reported profits of £470,000 on sales of £15.9m. The company earned a place on The Sunday Times Fast Track 100, the league table of private companies with the fastest-growing sales over three years.

“We don’t strive for a big bottom line, we strive for a big top line,” said Dawes, who with Rossiter has grown the company organically by reinvesting profits. They employ about 100 staff and expect revenues to hit £25m this year.

The founders attribute the rapid growth to a new wave of gym fanatics who view a protein-rich diet as a must for bulking up. This has created a competitive market, and supplements that do not always deliver what they promise.

“There are products that give the industry a bad name; ‘Take this and gain a stone of muscle in a month or lose a stone of fat in two weeks’. But anyone who knows anything about nutrition knows this doesn’t work,” said Rossiter, 33.

Bulk Powders lists all the ingredients it uses. New recipes are reformulated several times and put through taste tests before they are made available, exclusively, on the website.

“If you sell to supermarkets and high street stores, you lose control of your brand,” said Dawes. “This way we learn more about the customer and it allows us to cut retail or distribution margins.” Britain is its biggest market, and the company sells to customers in 13 countries on the Continent.

The founders grew up on the fringes of London. Dawes, the middle of three children, went to a comprehensive school in Staines. He earned pocket money as an assistant tennis coach. “I used to restring rackets for £3,” he said. His father is a business consultant and his mother a housewife. After graduating he trained to be a solicitor at Guildford College of Law while his future business partner completed his degree.

Rossiter, the elder of two boys, attended Chislehurst and Sidcup Grammar School. His father worked in the airline industry and his mother was a lunchtime school supervisor. He, too, was a part-time tennis coach as a teenager.

During the first five years of Bulk Powders, the founders did everything themselves, including weighing and mixing the ingredients for their recipes. When they did hire staff, it took some getting used to. “Delegating, especially when you do things your way and to your standard, is one of the hardest things a business owner has to do,” said Rossiter. The company’s headquarters in Colchester is also where its products are manufactured.

The key ingredient in many of the products is whey protein, a by-product of cheese-making. The challenge is to make it taste good. “It’s not delicious by any means, so we spend a long time developing flavours,” said Dawes.

The website also offers items such as chia seeds for superfood lovers. Customers can buy Bulk Powders branded vests, T-shirts and jogging bottoms. The bosses are not averse to launching “a clothing range that is more fashionable”.

Their immediate aim is to expand into America and more European countries. “The US is a huge market, but it’s also a lot of risk. We have to do it methodically,” said Dawes, from Sunningdale, Berkshire.

He and Rossiter, who lives in Colchester, own 98.8%. Last year they sold 1.2% to the chairman, veteran investor Robert Easton, but they intend to hang on to the rest despite cash offers from suitors.

Dawes’s advice for entrepreneurs is to overcome perfectionism: “You have to accept that your standards will never be replicated exactly by others, so recruit good people and lead by example.” Rossiter added: “Don’t be afraid to make mistakes; it helps you to build a better business.”