HomeVegetariansPret may turn over new leaf for vegetarians

A growing taste for meat-free salads and sandwiches containing items such as beetroot, baby kale and butternut squash has prompted the boss of Pret A Manger to chew over the idea of opening a vegetarian version of the sandwich shop. 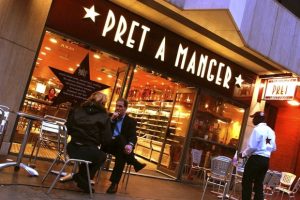 In his latest chief executive’s blog on the Pret website, Clive Schlee said that he had noticed “a distinct shift towards vegetarian” in the chain’s sales mix and was considering ways of responding to the trend.

Sales of its vegetarian sandwiches and salads had grown by 12.5 per cent in the past six months, ahead of meat products, while falafel and halloumi was now its bestselling hot wrap.

He said that its top selling SuperBowl salad was beets, squash and feta, beating chicken, salmon and crayfish alternatives. “This would have been unheard of five years ago.”

Mr Schlee, who has run the company since 2003, said that vegetables were also “taking a starring role in a number of excellent restaurants”, including ABC Kitchen in New York and Grain Store in King’s Cross.

Mindful that his company’s bestselling sandwich was the chicken caesar and bacon baguette, Mr Schlee asked: “How can Pret help people to enjoy more vegetarian food without being preachy or, worse still, alienating our customers?”

He said that one idea he was looking at was a vegetarian Pret A Manger shop offering the usual menu but replacing sandwiches and salads containing meat and fish with a range of vegetarian alternatives.

“These dishes would have to be good because in the food business it is always taste that wins the day,” he said. “Put simply, vegetarian food has to be delicious if it is to gain more traction.”

The Pret boss said that a vegetarian shop could “act as a beacon for more innovation” and encourage the company to “create tastier vegetarian food and tempt customers who are inclined to try new alternatives”.

He said that the idea was “still in its infancy”, adding: “There are some within Pret who believe we should be more cautious and simply put in a dedicated fridge full of vegetarian food. Other colleagues are excited by the symbol and the challenge.”

To help him to decide whether to push ahead with a trial, Mr Schlee is asking customers to vote for one of three options on the Pret website or via Twitter: “Open a vegetarian Pret A Manger; devote a fridge to vegetarian food in every shop; Pret is fine as it is.”

Pret, which is controlled by Bridgepoint, the private equity firm, recently reported a 14 per cent jump in underlying full-year earnings to £75.9 million, from turnover up 16 per cent to £593.6 million. It opened 33 shops during the year, lifting its total to 374, of which 288 are in the UK, 60 in America, 14 in Hong Kong, 11 in France and one in Shanghai.