HomeWillpowerOn your head: Where there’s willpower there’s a good employee

TO those of you who have given up a luxury for Lent — be it chocolate, chips or chardonnay — congratulations. 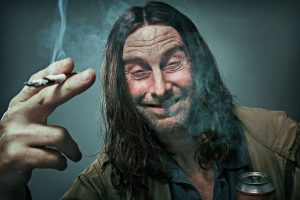 Out of control: Frank Gallagher from Shameless can never resist temptation (Channel 4)

Today is Refreshment Sunday and, to celebrate reaching the halfway mark, you are allowed a day of relaxation from your 40 days of Lenten rigours. It is a day of hope when Easter, and the resumption of self-indulgence, is in sight. And one of only two days in the year when pink church vestments are worn.

The three great monotheistic religions have much in common. All have periods of denial where willpower is tested.

Lent, Ramadan and Yom Kippur share three things. The first is the concept of abstinence and self-denial. This is most often associated with food: food or drink given up for Lent or not eating during the hours of daylight. Some rules are more onerous than others: nil by mouth is the strongest form of the decree.

The second theme of this period is repentance for sins of omission and commission. It is a time to look back and to make amends. It is also a time to reset the compass, to strive to be better.

The third theme is charity. It is a time to think more about others; to be grateful and to share one’s blessings.

In this atheistic era, it seems that for many people New Year has come to replace the great religious festivals. New year resolutions are not framed in terms of penance and giving, but in terms of a new start. Most resolutions are about eating and drinking less, exercising more and generally being less selfish and nicer to people. Watch the television advertisements to get a sense of what it is all about. Health clubs, nicotine patches, alcohol-free drinks get a good airing. Christmas is all about spoiling yourself and others, while New Year is all about restraint.

So the old Lenten ritual began: Shrove Tuesday and pancakes, Ash Wednesday and the start of the season of solemnity, simplicity and sincerity. As Robbie Williams sings: “…overdose at Christmas and give it up for Lent”.

And 40 days is a long time. It is a test of willpower. Psychologists are particularly interested in willpower and the power of self-control. For Roy Baumeister, an American social psychologist, it is, as the subtitle of his new book states, the greatest human strength. Practically all the problems of modern society, from debt to domestic violence, unwanted pregnancy to underperformance at school and work, can (at least in part) be attributed to willpower.

Some people imagine that you use willpower only once in a while, such as when you are tempted to do something wrong. The opposite is true. Research indicates that the average person spends three to four hours a day resisting desires. Plus, self-control is used for other things as well, such as controlling thoughts and emotions, regulating task performance and making decisions. Most people use their willpower many times a day.

But willpower is a limited resource, as we all know. We suffer “willpower depletion”. We become exhausted resisting desires and temptations and are more likely to give in to our urge to sleep, eat, have sex, smoke, play games, spend money, drink alcohol and so on.

Most of us know about willpower depletion at work. After a day facing bolshie customers or handling difficult staff, it is hard not to go home and open a bottle of good claret. Hitting the bottle is an attempt at restoration of the spirit, as are comfort eating and retail therapy. One is just too pooped to follow the plan.

That is why it is easier to resist temptation in the wilderness, as Jesus found. A monastery, a retreat, an isolated Scottish or Welsh cottage makes it so much easier than the hubbub of business life. Quite simply, to have the best shot at willpower training you have to be secluded and calm — go to a health farm or have a day of hill walking.

But the good news is that self-control is like a muscle: the more we exercise it, the better we become at not giving in to temptations. The important thing is to practise overriding habitual ways of doing things and to exert deliberate control over our actions. Over time, that practice improves self-control.

Another finding of relevance to work is the link between self-control and decision-making. After making decisions, people perform worse at self-control (so, if you have forsworn alcohol, don’t go to the pub after a board meeting). And after exercising self-control, people make poorer decisions, or avoid making decisions at all (so beware asking the struggling dieter to make decisions).

People with willpower make better employees. They resist temptations better and more often and as a result produce more. They do better under pressure and can be trusted to complete the task.