HomeStay FitIt’s time to slow down your hot yoga moves

Somewhere along its path to finding inner peace, yoga seems to have lost its way. For the past decade and more we have embraced the ancient practice in our droves. 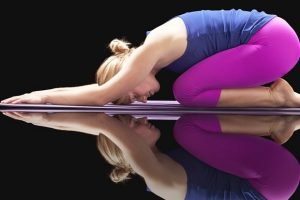 We have rushed from our high-pressured jobs and snatched time to keep up and it has progressed to being a gym-class staple with lightening pace. Getting ashtanga arms and a Bikram butt became our obsession as we pushed ourselves into postures more frenetically than its original devotees would have ever done.

Yoga is now suggestive of competitive stretching by lithe, super-bendy bodies and an emphasis on sweat. Yet just as we got used to the ever more dynamic downward dog, there is an opposing trend emerging among those who are trying to slow it back down.

Fed up with being wedged into a room packed to capacity (and beyond) where a hotshot instructor barks orders, the new breed of yogi is switching to forms in which movement is often barely perceptible — in some classes you are required to stay in the same posture for half an hour. It’s an era of post-mindfulness and those in the know are whispering about restorative and yin yoga in a way that affirms they are the next big thing in fitness.

In Los Angeles, New York and London, studios are reporting a sharp rise in demand for slow-mo classes as more regulars find themselves off the pace. The most popular is yin yoga, for years the awkward cousin of more fashionable varieties. It seemed insane to assume a posture and hold it when fast shifts between the moves were heralded as the route to a hot yoga-bod.

A decade ago, there were, at most, a handful of yin yoga classes in London. Now the number runs into the hundreds with many boutique studios claiming it is becoming the most popular approach with its focus on seated postures and loading the connective tissue and ligaments around a joint.

With restorative yoga, in which your body is completely supported by props from bolsters to eye pillows and blocks to belts, the emphasis is even less on flexibility and more on therapeutic relaxation. You can spend much of your time cocooned in a blanket.

They are yin to the yang of high-intensity interval training and running, the antithesis of competitive yoga, the kind in which A-type personalities strive to out-do the person on the next mat and men attack each class in the way they might a CrossFit workout of the day.

Yet Anna Ashby, who teaches restorative yoga at Triyoga, says that the increase in popularity this year has been enormous. “Since January I’ve noticed this huge tide change and I’m suddenly getting 30 or 40 people wanting to take part in every session,” she says. “People had been consuming yoga in all its latest forms and had got caught up with this hunger for the next pose, the next trend, the next teacher, but they’ve gradually begun to realise they are not switching off and that’s what they really need.”

Nahid de Belgeonne is the founder of the Good Vibes studio in Covent Garden, London, where the most popular sessions now include the snail-paced bliss yoga by candlelight and glow yin. She says: “There’s a growing acknowledgement that mass-appeal yoga doesn’t complement a stressful job and lifestyle. Most of our classes are becoming more gentle now.”

Inevitably, it’s a movement fuelled by a celebrity following, even though it has a more subtle effect on muscle-toning than the more gung-ho approaches. Mandy Ingber, the go-to yogi for Jennifer Aniston, Kate Beckinsale and Brooke Shields, is among those trying to combat the Hollywood stereotype of yoga by urging her clients to check their pace. “Remaining in a pose for a long time forces me to breathe and takes all of my presence,” she says. “ ‘Out of my head and into my legs’ is what I like to say.”

Khloé Kardashian is a fan as is Salma Hayek, the Latino actress whose body looks a few decades younger than her chronological 49 years. Hayek says she works with a yoga teacher who helps her tease her body gently into shape. “She taught me to tone [my muscles] without clenching them,” Hayek says. “You relax them and focus on the parts that need to be used, but never with tension.”

On the face of it, yin looks easy. You sit or lie down. There are no core poses, no warriors or planks and no speedy sun salutations. How difficult can it be? Belgeonne says it’s surprising how it moves you “out of your comfort zone”. In a typical ashtanga class, you might hold a posture for five breaths; in a yin session it can be anything from two to twenty minutes, an endurance feat for body and mind.

These longer holds apply the right kind of pressure to the fascia, the dense, fibrous connective tissue around the body that encompasses all muscles and bones. Small amounts of fascia are good news, but it builds up through poor posture and hardcore workouts to impinge daily movement.

“Yin works on the fascia and connective tissue as well as allowing the mind to rest,” Belgeonne says. Restorative yoga is not about stretching at all. In fact, movement is minimal. “Poses can be held for 30 minutes,” says Sarah Scharf, who teaches it at the Life Centre in Notting Hill, London. “And the emphasis is on comfort. If you’re not comfortable, it’s impossible to rest deeply, let alone stay still for that long.”

It’s the passivity of slow yoga that newcomers find most challenging. Ashby says that last week she spotted two participants in her restorative yoga classes furtively sending texts and emails as they lay with their bodies draped on a series of blocks. “We have become so used to living with constant mental stimulation from phones and the internet that people find it really hard to switch off,” she says. “Our minds are constantly cracking the whip and we don’t realise that we are putting ourselves through this chronic low-grade stress all the time.”

With mellow yoga come mellow instructors, which can also require a period of adjustment. “There are a lot of big egos in yoga,” Ashby says. “I peer through the doors of other classes and see teachers firing poses at people. You have to question what it’s become. What people really need is time out; a rest.” Slow yoga offers the permission to take it, she says: “People tell me after a class it’s the only time in their lives they ever just sit and breathe.”

Where to go slow

The Life Centre
A range of yin yoga and restorative yoga classes are on the timetable with teachers including Sarah Scharf. Its Yoga with Guided Relaxation class is also in demand (thelifecentre.com).

Triyoga
Yin, restorative and yoga nidra, which simulates a state of conscious deep sleep, are among the most popular. Anna Ashby is running an urban retreat (triyoga.co.uk).

Good Vibes
Glow yin works through a series of supported poses, while bliss yoga “nourishes you back into balance” with restorative moves. For those not ready to slow down completely there’s yang & yin, which starts fast and finishes slow (goodvibesfitness.co.uk).

The Yoga Lounge
This Manchester-based studio offers hot yoga in a gentle heated room. Queues form for the Monday evening Yin/Flow in which you try both slow yin-style yoga alongside more dynamic moves (theyogalounge.co.uk).

Bristol City Yoga
Restorative, yin and mindfulness classes are all on the menu at this chic city centre studio (bristolcityyoga.co.uk).