HomeRunningHow to start running after 40

Don’t give us that dodgy knee excuse — taking up running in middle age can add years to your life. 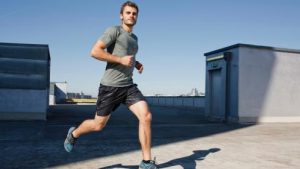 Regular running has been found to protect against osteoarthritis

Running is a route to a better-performing body and brain, a way to protect against the downsides of ageing. From your heart and lungs to your muscles and joints, there are few body parts that won’t benefit from a decision to cover more miles in your trainers. Even if you’ve spent a lifetime avoiding it, taking up running in your forties, fifties and sixties can add years to your life.

Far from being damaging to hips and knees, regular running has been found to protect against osteoarthritis and covering 15 miles a week reduces the risk of dying from dementia. Such findings have sparked a sharp rise in those discovering the sport in later life with 42 per cent of entrants in last year’s Great North Run being over 40.

“You’re never too old to start running, but you do need to respect the level of health and fitness that you have when you take those first steps,” says England Athletics and Team Saucony UK coach Nick Anderson. “It really is a case of setting small goals that are achievable each week. Going out every other day should be enough, two to three times a week.”

If that sounds like a big ask, the following tips may provide the incentive for you to turn running into a regular commitment.

Run with others
Unless you are the kind of person who bounds out of bed and into their trainers, finding a running partner or group is the best step to strengthening your commitment. Last week a survey by Superdrug found that 71 per cent of people felt that they would exercise more if they had a like-minded buddy to accompany them, and there’s scientific proof to back it up.

Last October Dr Pamela Rackow of the Institute of Applied Health Sciences at the University of Aberdeen reported that people who found an exercise partner ran or worked out more often than those who went solo. “Our results showed that the emotional social support from a new sports companion was the most effective,” she said.

Walk-run to start with. You will see noticeable changes within the first week

There is no shortage of places to drum up running buddies. Run Together (runtogether.co.uk) is a campaign by England Athletics that provides sociable groups for new and more experienced runners, all overseen by a qualified leader. Most sessions are free and there are three levels from the walk/run starter groups through to more challenging programmes for those already running at least once a week.

Then try Great Run Local (greatrunlocal.org), a series of free weekly 2km and 5km training runs held at more than 700 venues, before aiming for one of the Simplyhealth Great Run events — from 5km to the full marathon distance — held all over the UK (greatrun.org).

Warming up is not optional
Lacing up your trainers and heading straight out of the door at top speed is never a good idea, but particularly not in your fifth decade onwards when muscles are less pliable and springy. “Warming up serves to increase body temperature, circulation and joint mobility so that you are ready to pick up the pace,” says John Brewer, professor of applied sports science at St Mary’s University.

Pre-run static stretching — in which you hold a position for a few seconds — was frowned upon by experts but now gets the green light for runners. A study at the Nicholas Institute of Sports Medicine and Athletic Trauma at Lenox Hill Hospital in New York last year showed middle-aged recreational runners who stretched in this way were significantly less likely to strain or tear a muscle.

“About 5-10 minutes of gentle stretching, focusing on the running muscles such as the hamstrings, glutes, calves and quadriceps, is sufficient,” Brewer says. “Then start at a fast walk, progressing to a very light jog for 5-10 minutes at the start of your run to get fully warm.”

Prime your mind
Running is as much a mental pursuit as a physical one, so staying motivated should be high on your list. Of the hundreds of books on offer, there are two that should be added to your shelf: Run Yourself Fit by Christina Macdonald (Vie, £14.99), a practical guide to increasing your stamina sensibly; and Nell McAndrew’s Guide To Running (Bloomsbury, £12.99), which has detailed training programmes for all abilities and every distance from 5km to a marathon.

If it’s the sheer joy of running that inspires you, arm yourself with Running Free: A Runner’s Journey Back to Nature by Richard Askwith (Yellow Jersey, £8.99). I defy you not to hit the trails after reading it.

Indoors or outdoors?
Many serious runners look down on those who train solely on the treadmill. To them, outdoors is hardcore; indoors is for wimps. But if you really can’t face running in rain or freezing temperatures, it’s better to hit the whirring belt than not run at all.

Some researchers have shown that newcomers — whatever their age — experience fewer problems if they start out on a treadmill that offers more “give’’ than tarmac or concrete. Over time, though, your susceptibility to injury is likely to rise if you stick to one surface as you load the same muscles and body parts in the same way, potentially increasing the risk of overuse injuries.

Outdoors your body is exposed to changes in terrain, undulation and direction that force you to use different muscles. You are likely to move faster outdoors. Scientists at Nanyang Technological University in Singapore found a group of runners they observed moved significantly more slowly indoors, something they put down to the lack of visual cues when staring ahead on a treadmill.

Tune in
You will either love or hate listening to music on the run. Exercise psychologists divide us into two groups — those who are motivated by tunes and those who find background music irritating.

If you’re in the first camp, selecting the right soundtrack can spur you on. Dozens of studies have shown that a good tune can distract the mind, enabling you to work up to 10 per cent harder without realising it and, according to scientists at Brunel University, enhancing endurance by as much as 15 per cent.

It may also boost your mood and make you feel more alert, all great news for runners. Since you’ll instinctively run to the beat, faster tempo tracks are recommended. Each to their own, but last week a survey of Virgin Active members revealed their most motivating tracks to be Eye of the Tiger by Survivor; Another One Bites the Dust by Queen; Wake Me Up Before You Go-Go by Wham!; The Final Countdown by Europe; and Shake It Off by Taylor Swift.

Don’t obsess about your style
Analysing your gait, measuring your stride rate and perfecting your form have underpinned advice in recent years. However, many experts now believe that your running technique is less of an issue than once thought.

Correcting the obvious such as a nodding head or rolling shoulders can be helpful, but a unique style is not necessarily a bad thing. “Even some elite runners don’t have a perfect technique,” Brewer says. “As you get older it can be counterproductive to try and force changes if a technique is ragged but not having any ill effect.”

You are likely to become a more stylish runner just by doing it more often. In a 2012 study at the University of Exeter a group of women runners — all beginners — were analysed as they prepared for their first half-marathon. Each was given a pair of neutral running shoes and had their technique tested before they embarked on a ten-week training regimen.

While their style left a lot to be desired at the start, it improved significantly by the end of the trial with the researchers noting “they began bending their knees and flexing their ankles slightly more, so that their legs became more flexed as they left the ground”, benefits that occurred simply as their bodies adapted to the regular motion of running.

It’s OK to stop and walk
One of the unwritten rules is that you shouldn’t stop and walk. Be prepared to break it without feeling guilty — Anderson says it’s perfectly acceptable, particularly in the early days. “Just walk-run and do small amounts to start with and you will see noticeable changes with how you feel, the way you sleep even with the first week,” he says.

A study in the Journal of Science and Medicine in Sport last year found beginner middle-aged runners training for their first marathon benefited from a walk-run approach in which they walked for roughly a minute after every 1.5 miles run. Compared with another group asked to run continually, the run-walkers put less strain on their bodies, despite picking up speed each time they resumed running. They also reported feeling less tired and having little muscle soreness at the end of the race.
The entry ballot for the Simplyhealth Great North Run on September 10, the world’s biggest half-marathon, is now open. Register at greatrun.org