English football has become the survival of the fittest. 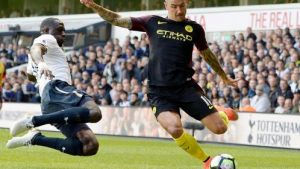 Giving it all: Super Fit Football was in full flow when City took on Tottenham

Jurgen Klopp is fond of a story from the journey to his first title with Borussia Dortmund. It happened in pre-season. He had put his players through a brutal fitness drill involving 11 repetitions of a set of exercises. They lay on the turf, exhausted.

Klopp walked among them. “What if I tell you that doing a 12th set, now, will help you win the league?” Klopp asked. To a man his players leapt to their feet. Welcome to Super Fit Football, where tiredness is just a state of mind.

Manchester City embrace it. Tottenham are formidable exponents. Klopp’s Liverpool are the present masters. And these three teams — along with Arsenal, whose physical output has also increased — are running (you could say literally) the Premier League.

Tottenham’s victory over Manchester City seven days ago was a dizzying blur of pressing and sprinting and chasing and darting, and of more than merely sweat. Just like Liverpool’s dazzling win at Chelsea. Super Fit Football is about the third part of the moniker too: these sides execute skills and tactics at the same breakneck speed they do everything else.

City and Liverpool are the two top possession sides in the Premier League, as well as those who run the furthest and sprint the most. Some fusion. Spurs and Arsenal also score very highly for both. If Leicester won the title last season by beautifully executing something traditional — Italian “low block” counterattacking — the top teams, so far, of 2016-17, seem to be taking the game somewhere a little new. They play technical football that reaches fresh frontiers in terms of the pace and intensity they sustain.

It is not better football than played by the great club sides of the past but it is quicker and more relentless. It feels like somebody has both extended the battery life and pressed the fast forward button on certain Premier League games.

The running stats are nuanced. Although different teams, notably Liverpool and City, top this season’s distance-covered table, the kilometres run by leading teams and players have actually stayed roughly constant over the past three seasons. Where the difference lies are in the sprint figures. Speed levels of teams are rocketing.

Tottenham players come off the training pitch looking grey. And yet they enjoy it

Liverpool made 4,165 sprints in their first seven games, an enormous 478, or 13% more, than the team (Bournemouth) who made the most sprints after seven in 2015-16. Indeed, Bournemouth’s 2015-16 figure would only put them fifth this season.

The sprint numbers of merely the 16th-best team this season (Everton) are more than the seventh best side (Liverpool) a year ago; pace is increasing across the board. A sprint, by the way, is defined as an action performed at more than 25.2km/h. In other words a player moving at around 14 seconds 100m pace, or quicker.

The player to sprint most is Burnley’s George Boyd, a perennial leader in the running stats. The table also demonstrates how Diego Costa, Eden Hazard and Theo Walcott have increased their intensity. Otherwise it offers further evidence of Liverpool, City and Tottenham’s workrate, and the consideration for a rival like Manchester United — bottom in distance covered — is how to respond. After losing three consecutive games Jose Mourinho dropped two of his slower footballers, Marouane Fellaini and Wayne Rooney.

Klopp believes Liverpool are only at the start; his players are still some way short of the fitness levels his Dortmund attained. He is already looking forward to next summer where, without a major tournament, he will be able to drill his entire group in pre-season to his heart’s content.

Despite the absence of his Euro 2016 players, Liverpool’s pre-season work laid the foundations for this season’s surge. Klopp presided over treble sessions. A witness described “strewn bodies and players panting and choking back vomit” but also learning to take masochistic pleasure in Klopp’s methods. The squad would sit after dinner speculating with grim smiles about what horrors he next had in store for them.

They bought into something Klopp told them: we can’t control other clubs spending more than us, but we can control fitness and if we’re not the richest team in the league we can be the fittest. “Give Jurgen training over a transfer any day,” said a source. It was usually 30 degrees when Liverpool’s squad was working out, sessions lasting 90 minutes. In five weeks, Liverpool also played nine pre-season games.

There has been little let-up since the season began. The players had just two days off in September. Even tactical sessions are tough: the team is drilled at match pace, at keeping compact, and at group pressing. A favourite drill involves mannequins wearing different coloured bibs. Klopp shouts a colour and players sprint to the right mannequin as if they’ve just lost the ball.

Yesterday, those Liverpool players not involved with their national teams were at Melwood for a double session. But Klopp is also big on recovery: Liverpool’s training week tends to peak in intensity midweek with lighter sessions either side. It’s all calculated. Klopp has a university diploma in sports science and knows his subject. He recruited fitness coach Andreas Kornmayer and nutritionist Mona Nemmer from Bayern Munich. Both are said to have made differences.

Pep Guardiola has a conditioning ideology he has evolved since whipping a Barcelona squad grown flabby under Frank Rijkaard into extraordinary shape. He began his reign at Manchester City by banning overweight players, such as Samir Nasri, from training, and is big on “disguised running” — intense exercises done with the ball so as to not feel like fitness drills.

Mauricio Pochettino is similar. Spurs are working hard during the international break — the players trained hard Tuesday to Friday, with a double session on Wednesday. Pochettino, though, has not increased Spurs’ general training hours — it is more that he has brought a ferocity to sessions. Players come off the training pitch looking grey. And yet enjoy it. “We’ve got a big squad and, if you are tired, you’ve got fresh players ready to come in. In other words, don’t be tired,” Ben Davies smiled last season.

Pochettino’s assistant manager Jesus Perez is a qualified fitness coach — again, science is involved. Swansea’s Leon Britton, in a conversation in May, reflected that football is feeling the impact of a more qualified breed of manager implementing what they have learnt on coaching courses and in other study.

“There’s a lot of high intensity, quick pressing,” he said. “The new generation is producing training sessions that reflect the game: they are pressing quicker, getting players to recover quicker. Training is built like that.”

Super Fit Football. Where tiredness is a state of mind. Which relentless team will run — no, sprint — off with the Premier League?