Fernando Alonso has returned to training in an effort to get back into the cockpit of his McLaren Honda car at the Chinese Grand Prix next week. 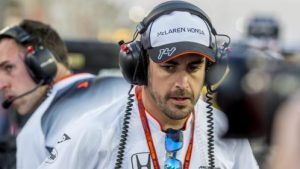 The two-times world champion posted a picture on Instagram of his workout using exercise elastic and a static bike with a message for his fans that said: “Return [to] the training. In the next few days I hope to do also cycling and swim. Step by step.”

Alonso clearly feels it is crucial he gets back to work in Formula One after missing the Bahrain Grand Prix last weekend. He may also have been spooked by the performance of his young replacement, Stoffel Vandoorne, who flew in at the last moment and then scored McLaren’s first point of the season with an excellent tenth place.

Speculation swirls that Alonso will retire if McLaren cannot deliver a competitive car but he was in determined mood in the Bahrain paddock, approaching Johnny Herbert, the Sky Sports F1 pundit, mid-broadcast to reprimand him for predicting that he would walk away.

Vandoorne got his drive despite muscular efforts by Ron Dennis, the McLaren chief executive, to persuade F1 medics that Alonso was fit. However, the broken ribs Alonso suffered during his high-speed crash in Australia, the first grand prix of the season, were considered too much of a risk.

Alonso’s relationship with McLaren has been a torrid story of extraordinary events. He was sacked by the team in 2007 after his involvement in the Spygate row, only to return last season after leaving a disappointing spell at Ferrari. However, Alonso was concussed in pre-season testing and missed the 2015 opener in Australia.

At 34, the clock is ticking on Alonso’s career and he will want to be on the grid in China to discover whether the McLaren Honda that was so woeful last season has turned a corner.