Arnold Schwarzenegger may once have mocked a film opponent: “You hit like a vegetarian” but today the actor and bodybuilder urged his fans to give up eating meat to help save the planet. 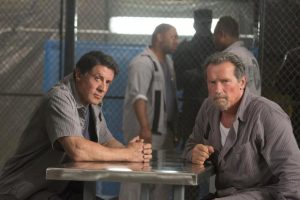 Speaking at the Paris climate change conference, Schwarzenegger reassured the aspiring Mr Universes of the future that their body building goals needn’t suffer if they avoided steak.

He urged everyone to become vegetarians for at least part of the week to help reduce emissions from the rearing of livestock.

Mr Schwarzenegger, who as governor of California led a drive to reduce use of fossil fuels, said it would be too demanding to ask people to become completely vegetarian.

But he said many successful body-builders did not eat meat.

“You can get your protein many different ways. People will buy in to stop eating meat one or two days a week – you have to start slowly. It’s a very big challenge but it doesn’t mean it shouldn’t be done,” he said.

The livestock sector is already responsible for 15 per cent of global greenhouse gas emissions, the same proportion as all the world’s vehicles.

It is also responsible for a third of global deforestation.

Consumption of meat is expected to rise by 76 per cent by 2050 because of population growth and people in developing countries adopting western-style diets, according to the UN Food and Agriculture Organisation.

Mr Schwarzenegger said it was possible to cut emissions without “taking people’s joy away” by making them stop flying or driving.

“What we should do is look for alternative technology. You shouldn’t stop the way you live but just change the technology,” he said, mentioning the energy-saving of LED lighting.

Writing on his Facebook page, he said he did not “give a damn” if people believed in climate change as long as they accepted the need for cleaner technology, such as electric cars.

“I couldn’t care less if you’re concerned about temperatures rising or melting glaciers. It doesn’t matter to me which of us is right about the science.

“I just hope that you’ll join me in opening [the door] to a smarter, cleaner, healthier, more profitable energy future.”

He said even if people did not believe global warming was a serious threat, they should join efforts to reduce use of fossil fuels because they caused 19,000 deaths a day globally from air pollution.

“A clean energy future is a wise investment, and anyone who tells you otherwise is either wrong, or lying. Either way, I wouldn’t take their investment advice.”